Skip to content
By Daniel ToddJun 2, 2015
Tags
Share
In the second part of this farm update I focus on sex. Not the type of sex that gets the heart beating and the mind racing but the type of sex that makes the running of a farm completely dependant upon spreadsheets and calendars. I have mentioned the maths before but to reiterate a pig comes into heat every 21 days. Once pregnant the gestation is 3 months, 3 weeks and 3 days. After the farrowing occurs the piglets spend 8 weeks with their mother, suckling from her milk and eventually some creep feeding of the grains that the sows eat. Finally, after the 8 weeks, they are collected up and transferred to the grower paddocks where they will live for another five to six months. Well thats the theory, what about the practice, and more specifically how do we get them pregnant and how do we know they are pregnant. Here on the farm we use natural methods for getting the sows pregnant, better known as Hugh and Gordon. On larger farms they prefer to use artificial insemination as this ensure the sows don't get hurt by the boar and they can be more certain of the date of impregnation, however we have the space and the time to focus on natural breeding. The sows are put to the boar for a period of 25 days, this ensures the sows will be on heat at least once and normally twice. After this we cycle the sows and move them out to be replaced by the next lot. Sometimes we don't have another sow to put in with the boars so to ensure the boars don't get lonely the sows are left in the paddocks for a longer time. 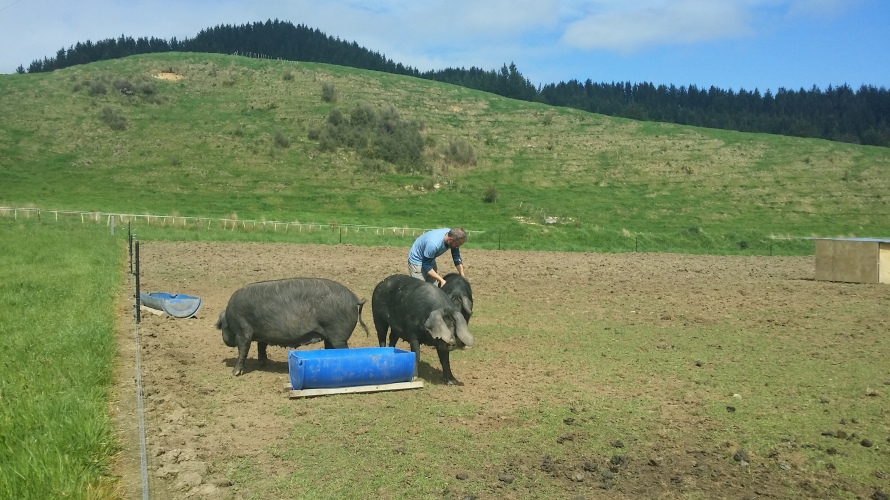 Gordon (at the back getting a scratch) with his girls.[/caption] Despite giving the sows at least 25 days with the boars it is still important to be able to tell when the pig comes on heat. There are normally physical signs to help to identify this and most pig farmers will also tell you that if you push the sow from behind and she refuses to move then she is very likely to be on heat. The problem with both of these methods is that they are open to interpretation and can sometimes be unreliable. Unfortunately the cost of an ultrasound machine is simply too much for us to buy so we have to use the old methods of checking for signs of heat and being patient. In most cases I have been lucky and the pigs have all been pregnant first time but as we get busier its more difficult to leave the sows with the boars for longer and not all sows come on heat in the same way, making it difficult to know if they are pregnant or not. Recently we have had a few failed attempts and this can have a real effect on business plans because we are suddenly ten pigs down on expectations. The first sow to let us down was Martha. Martha is a very Large Black who came as a package deal with two registered rare breed Berkshires, unfortunately, after living with a boar for months, she simply did not come on heat and could not get pregnant. I had two options but given the complications of slaughtering a 250kg sow, the abattoir will not take pigs over 80kg and I cannot sell the meat if we home kill her, she has escaped culling and has become our companion sow who will keep any lonely boar company whilst they are not in service.

Martha, the Large Black companion pig.[/caption] The second sow to fail to get pregnant was more of a surprise to me, she is a registered Berkshire and had originally arrived on the farm already in litter, she was a good mum with 11 piglets but second time around she failed to come on heat and I suspect it was because of a hip/leg injury making her unsuitable for mating. Jennifer is a typical example of an untypical pig. she is difficult to tell when on heat, there are very little outward signs and she is so stubborn she will refuse, when pushed, to move if on heat or not. I waited with in trepidation and baited breath as the 15th May approached and passed, it was obvious that she was not pregnant but being a big pig I still had some hope that she was simply not showing. However its now 20 days after her litter was due and whilst she has proven to be a great companion to Ruth, who had a litter at the beginning of May, she will soon be put back to the boar and I will be watching very closely this time. Its a sad fact of life on the farm that all the animals on the farm need to provide a return, we simply cannot afford to become a rescue home to old animals which continue to cost us $2 per day in feed. Let us all keep our fingers crossed that Jennifer delivers us a litter soon. After 18 months on the farm I have learnt a lot about pigs but I still need to become better at recognising the pigs heat cycles, planning the mating and ensuring the pigs are pregnant after being moved out from the boars. Its all part of the learning experience and I have quickly learnt, to my detriment, that planning the breeding is the most important part of the business because when I get it wrong it results in a shortage of stock to sell eight months down the line. This is actually the biggest difference between my old career in Consumer Electronics and my new career as a farmer, whereas I used to be able to quickly increase supply by buying more products I now have to plan eights months in advance to meet my customers demands, and if I get it wrong we have nothing to sell.